I’ve had the Cold Steel Trail Hawk for a little over a year now, so this won’t be a “First Impressions” review. I’ve had the Cold Steel Trail Hawk out in the field and tinkered with it around the homestead and feel that I am ready to give my thoughts on this piece of gear. I’d like to start by explaining that a tomahawk is not an axe nor a hatchet. Comparing it to those tools is akin to comparing apples and oranges. It is also not a knife. It can however, perform some of the jobs that we would utilize the above listed tools for as well as several others (a wood plane or a weapon for example). It will not outperform those tools at their intended functions, but it can be used for all of them without having to carry each one of those items when you head out to the field.

Because I understand what a tomahawk is, I had realistic expectations of how it would perform. I was a little disappointed with it when I first opened the package, though. The Black paint that the hawk came with was unattractive, the handle didn’t fit the head well enough for a good friction fit (as tomahawks should be) and due to the poor fit, it came with a small set screw to hold the hawk in place. So before I was ready to take the Cold Steel Trail Hawk afield, I had to make some slight modifications. First, I removed the hawk and reshaped/ sanded the handle so that I could get a good friction fit. Second, I threw the set screw away. Third, I removed the black paint from the hawk and blued it using gun blue. Fourth, I stained and sealed the handle to make it a little more resistant to weather. Lastly, I put a 20 degree edge on the hawk and sharpened it using the Ken Onion Edition of the Worksharp Knife and Tool Sharpener (highly recommended, will review soon). These mods took me less than 3 hours. Because of the low price of this tool, I wasn’t too bothered by having to put a little bit of effort and expense into making it more to my liking. Below I have a stock pic of the Cold Steel Trail Hawk as it comes as well as a photo of mine after modifications. 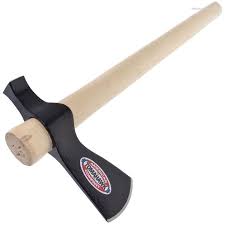 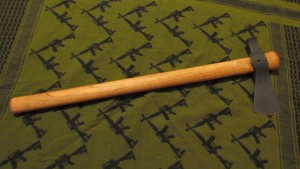 Now for performance. I’ve used the Cold Steel Trail Hawk process firewood (including feather sticks due to the edge that I put on it), build a shelter (tent stakes, etc.), clean fish and skin/ dress game and to do some detail work such as trigger sticks. It performed all of these tasks acceptably. Would I have liked to have had tools that were specifically designed for these tasks? Of course. I was just trying to see what all could be accomplished with the Cold Steel Trail Hawk, and how effective it could be at each. As I stated, it performed acceptably at all, but surprisingly, It worked great as a skinning knife (think hawk removed from handle and used like an ulu knife)! I wouldn’t want to use it to cut down a tree, but for processing smaller firewood (no more than 4″ in diameter), it worked just fine. I also have taken down a few saplings, some river cane and bamboo without any trouble. Overall it is a good all around, and at times downright handy, tool to have in the woods. If you read my review of the Super Shelter (here), you may remember that I forgot my folding saw and had to use the Cold Steel Trail Hawk to process all of my firewood. Without it, I would have been in a very dire situation up in the Sandia Mountains in below freezing temperatures.

Tomahawks are also known to be effective weapons. As of yet, I have had no need to use mine in a self defense situation and if that need arose, I would much rather use other tools for that purpose. While I have no doubt it would cause major trauma to anyone that I struck with it, it would be a last resort for me to use as a defense weapon. Tomahawks are known for their throwability (is that a word?). I would fully expect that any weapon I threw at an adversary would immediately be used against me, so that’s out. I will admit that I have thrown my hawk just because, well because I’m a guy and we just have to do shit like that. It’s fun, but I don’t recommend it for self defense. I could see myself maybe throwing it at an animal in a survival situation to procure food, but other than that it’s just a recreational thing for me.

My overall view of the Cold Steel Trail Hawk boils down to this: It’s a useful tool to have in the woods and will no doubt become very useful, as well as much appreciated, in an outdoor survival situation. Would it take the place of a knife? No, not for me. I do however carry it in my pack when I head out, sort of… I carry the hawk (head) in my pack. I can use it as a hand tool do most tasks that would be too rough on my knife edge, and I can use the hawk itself to make a suitable handle in the field (as seen in the video below). Carrying it in this way saves a little bit of weight and is a lot less awkward to tote around. For $20.00, I’d recommend that you try one out and see if it works for you. If it doesn’t, you can still get your $20.00 of enjoyment out of it by having fun with your friends learning to throw it!

This a great video by IA Woodsman showing the versatility of the Cold Steel Trail Hawk: