While this article can’t possibly cover every species in every area, these guidelines can increase the probability of you finding fish/ game to harvest for food… “Higgy”

Let’s start off with locating “edge” habitat. Edge is where two or more different terrain features or types of habitat come together. It may be where woods meet grassland or agricultural land, or a corner where a clearing is bordered by woods on one corner and crops on another. While there are many combinations of “edge” one thing remains constant, critters will be there! Some very productive examples of edge in my neck of the woods are where woods meet up with farm crops (we primarily see corn, milo and soybean crops in my area), woods up against cutover (after timber is harvested, the opening of the canopy enables a lot of tender browse to begin growing) and power lines (the power lines are often planted with wheat or rye grass and have woods on one or both sides). The reason that edge habitat is a good area to hunt is that the animals can access a food source while remaining close to cover to hide in if they feel threatened. I have seen more game in this type of area than anywhere else. The pictures below show some examples of edge. 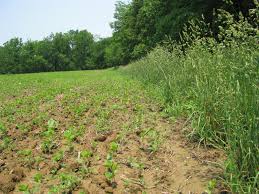 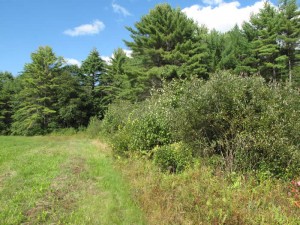 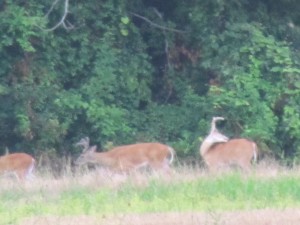 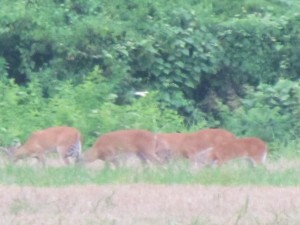 The next type of habitat that is important to recognize and that is very productive for putting meat in the freezer is food sources. Whether it is croplands, grass/ browse (browse are tender new sprouts or new leaves) or acorns/ fruit; food sources will provide you with opportunities to take game. The key to hunting food sources is to actually observe the feeding habits of the animals you intend to hunt (I refer mostly to deer as they are common throughout the U.S. and are the most available big game animal in most of the country, but these principles apply to nearly all animals including game birds). Throughout the year, the animals will change from one food source to another. Knowing which food source is preferred at different times will increase your chances at taking an animal. One big tip for deer is that no matter what foods are available, once acorns from the White Oak begin to fall THAT will be their preferred food source until they become scarce! While deer will feed on acorns from the Red Oak as well, the White Oak acorns are the favorite by a long shot, so learn how to identify them and know when they are dropping acorns in your area. Below is a simple way to identify the White Oak vs the Red Oak. 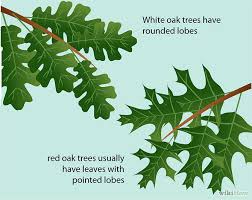 While knowing what the animals are eating is important, it is equally important to know when their eating it. Both what time of year and what times of day. In the warmer months where I am at, early morning and late afternoon are common times to watch deer feed. When it’s cooler and hunting pressure is on, the deer are mostly nocturnal feeders here. Since it is illegal to hunt deer at night, it becomes important to know their habits and determine where you are most likely to intercept them on their way to and from the food source.

The next area that you need to be able to identify are bedding areas or where your target animal finds it’s shelter or nests. Most animals will prefer thick, nearly impenetrable vegetation to bed in. It offers them protection from weather and alerts them to predators. I don’t recommend trying to hunt animals in their bedding areas (although the biggest buck I ever took was bedded down at the time). It is extremely difficult to enter their sanctuary undetected and once you’ve violated that sanctuary you run the risk of them relocating elsewhere. The best way I have found to use bedding areas in my hunting is by identifying where the animal sleeps, where it eats and setting up an ambush somewhere along their route to and from the two different areas. This is by far the most productive method for me personally. Generally speaking, in the early morning the animals are heading to their bedding areas from their food source. In the late afternoon, they are leaving their bedding areas to head to their food source.

If you live in a desert type of terrain, watering holes can be the most effective habitat to hunt. In areas where water is scarce, you will inevitably find game coming to and leaving from water. Where I am now, water is everywhere so this method isn’t as effective as it was in Arizona or New Mexico. If you live in an area where water is hard to come by, identify game trails leading to and from the water to locate feeding and bedding areas and set up your ambush spot accordingly.

Another very important aspect to understand about any critter you are hunting is it’s breeding habits. Being able to identify when animals are in the “mood” or are seeking to breed is a huge advantage to the hunter. Much like humans, the thought or promise of sex leads to carelessness and bad decisions. It is the one thing that will cause an otherwise careful and alert animal to ignore their natural instincts and warning signs that there may be danger ahead. Use it to your advantage!

Finding fish can be a little more difficult as it is hard to identify structure and cover under the surface of the water. What I have found to be most effective is to find one of the following: In rivers, streams or creeks I try to identify pools where the current is minimized by some type of structure (this provides the fish with a place to easily stay put and let the current bring food to them). In lakes and ponds I try to find where creeks or streams feed into the main body of water (the water has more oxygen here and the streams tend to bring food into the water at these points). Another thing I look for is any kind of identifiable cover or overhanging trees. The trees offer shade with the bonus of insects and such that fall into the water providing fish with an easy meal.

The only way to become really proficient at identifying where animals are feeding, bedding or breeding is to spend time in the woods, period. While reading about it can be helpful, there is no substitute for actually getting out in the field and observing things for yourself. With experience, in time, you’ll be able to anticipate and understand the actions of the animals, which makes it much easier to set up a successful hunt or fishing trip.