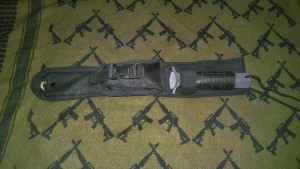 Let’s start with the full disclosure of the fact that I came of age during the 80’s, so yes, I do have a small part of me that is partial to the “Rambo” style of knife. That being said, every one that I have ever owned or handled was promptly destroyed. Until now! The Schrade SCHF-1 is a hollow handled knife (which comes with a handy little tool kit in the handle, that I immediately relegated to my toolbox). However, unlike the “Rambo” type knives that had the blades bolted or welded to the handles; this is one piece of 1070 High Carbon Steel. From what I understand, Chris Reeves designed this knife (called “The Project”) and sold his models in the $300.00+ price range. Taylor Brands (Schrade) acquired the design and began producing it in their Extreme Survival Series. What we now have available is a solid “Rambo” type knife that is not only extremely durable, but that is affordable also (about the $50.00 range). Keep in mind that this is not a “first impressions” review. I’ve owned this knife for nearly two years and have had it in the field every time I’ve gone out since it was delivered. 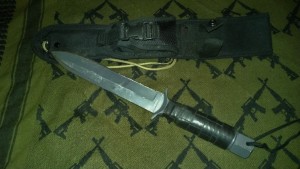 Before I get too far into the knife and my thoughts about it, let’s take a look at the sheath that it comes in. This blade comes in a ballistic nylon type sheath with a plastic insert to keep the blade from cutting into the sheath itself. The sheath has Molle compatible components and a velcro belt attachment that can be put on your belt and/ or removed without unsecuring your belt (nice feature BTW). The sheath also has a removable compartment (presumably for a sharpener, fire kit, etc) on the front. The sheath is functional, but nothing spectacular. Mine will be replaced by a Kydex sheath soon and I am sure that the sheath that was included will end up in a closet or garage somewhere. In my opinion, Schrade could have saved the money on the tool kit and put it into a better sheath. 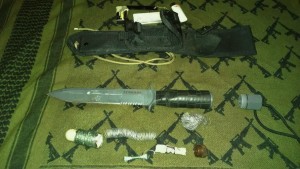 Now for the knife itself… The handle is 5.2″ and the blade is 7.5″ spearpoint with about 1.5″ of flat serrations at the base (nearly 13″ overall length). This is a large knife and weighs in at just over a pound. The knife was reasonably sharp out of the box and took an edge fairly easily. It also holds an edge surprisingly well. The knife comes with a gray matte like coating that wasn’t something that I was thrilled with, but until today I wasn’t bothered by it enough to get rid of it. The handle is knurled and is not slippery when working with the knife (neither sweat or blood was an issue). It is however, very cold in the winter and can be uncomfortable to work with. I solved this issue by placing a bicycle inner tube over the handle and a couple of Ranger Bands for good measure (See pic below). I did a nice paracord wrap for a while, but it just made the handle too big for my hands and since I care more about functionality than appearance, I removed the paracord and stuck with the rubber. The butt cap is not made of the same 1070 High Carbon steel as the rest of the knife so I have never felt comfortable using it as a hammer for anything too tough. There is an O-ring on the butt cap that keeps water out of the hollow handle, which so far has worked very well (a small accident in Colorado tested the “waterproofness” of the handle. Let’s just say that the whole knife and most of the wearer were completely submerged). 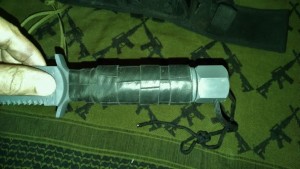 Close up of my “Ranger Band” handle

What and who is this knife good for, you may be asking? It is my opinion that knives are a very personal thing, so I will address this knife’s strong and weak points, you will have to decide if this particular blade will suit your wants/ needs. I feel that this knife is well suited as a “survival knife”. To me, a “survival knife” must be able to handle many tasks (although, it will most likely not be ideal for any single task). The kind of tasks I expect a “survival knife” to handle are; processing wood, dig, food prep, cutting cordage and/ or vines, process game animals, hunt and personal defense (fighting).

* This knife is durable enough to handle all of the above, still be functional and retain an edge. I doubt that it would be my choice for any of these single tasks, but I have every confidence that it can perform them all for a long period under tough conditions.

* The steel. The 1070 High Carbon steel seems to be a good mix of hardness for edge retention and still easy enough for an amateur to re-sharpen.

* The hollow handle. I always like having a few items for food procurement and fire making handy, just in case.

* The point. I feel that this speartip is far superior to and much stronger than the clip points I’ve owned in the past.

* This knife is tough and functional.

* The sheath, as I stated earlier.

* The butt cap, it should be the same steel as the blade to promote more confidence in using it as a hammer if needed.

* The coating. It seemed to me that it created “drag” while batoning wood and when digging fatwood out of stumps

* The serrations are next on my list (this is completely personal preference, I just prefer a non-serrated blade).

* The round handle. It is not as ergonomic as a lot of other knives and may be uncomfortable for some users.

* Not attractive. While this doesn’t bother me, I know it’s an issue for a lot of folks.

* The length. It just seems a bit unwieldy to me for a lot of tasks.

In conclusion, I think that the SCHF-1 is definitely a suitable “survival knife” and I would recommend it. Being a Marine, I have a lot of sentimental attachment to the USMC Ka Bar, but in all honesty, this knife is a lot tougher than the USMC Ka Bar’s that I’ve had. They both have a weakness as far as using the butt to hammer, but more importantly, I have broken two of my Ka Bar blades and I have never had a concern that this blade would fail. I’ve also broken two of my Buck 119’s. This may be more due to the clip points vs the spearpoint tip, but the fact remains that I have much more confidence in the SCHF-1 than those blades. As to my issue with the coating, length and serrations; I removed the gray coating and treated the blade with gun bluing (see pic below). Also, Schrade offers the SCHF-1SM that has no serrations on it’s 5.6″ blade (4.7″ handle, 10.3″ overall). This may be exactly what the doctor ordered for me. I will still keep my SCHF-1 in my vehicle kit as a back up because if it was all I had, I know that I would not be worried in the least that it would be there for whatever I may need it for. 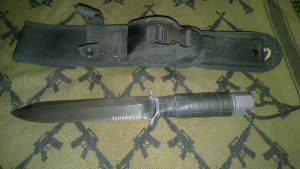 The blade after bluing

One thought on “Schrade SCHF-1 Review”