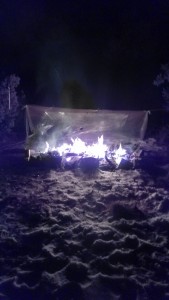 I have some time away from the “day job” today, so I thought I would go ahead and get this review written. I am still editing the youtube video, but it should be along shortly…

The Super Shelter concept was developed by Mors Kochanski, the Canadian Bushcraft and Wilderness Survival Instructor, and is a simple set up of a tarp shelter covered in the front by clear plastic (such as a painter’s drop cloth) with a fire in front and a mylar blanket on the inside of the tarp (the back wall) to reflect the heat from the fire onto you. I have heard and read that these shelters are very effective in freezing temperatures and are very inexpensive. Not being one to just take somebody’s word for it, I decided to hike up into the mountains this winter and see for myself.

On January 15th I hiked up into the Sandia Mountains just north of Albuquerque, NM to experiment with the Super Shelter. There was patches of snow on the ground at lower elevations that became thicker as I went up in elevation. I hiked up to about 8,000 ft or so and found a suitable place to set up camp. The ground here was almost completely covered with snow. There was a slight breeze and very clear skies which promised a very cold night ahead; perfect conditions for this test!

So that’s less than $40 for the shelter itself (and all of these items are not necessary, such as the tarp clips. They are just things I wanted to experiment with). I also used a 5′ x 7′ casualty blanket (purchased on Amazon.com for $18.46) from my pack as added ground insulation. Even if you include that, it is less than $60. I challenge you to purchase a tent and sleeping bag that will get you comfortably through a night outdoors in below freezing weather for less.

For construction, I simply tied a ridge-line between two Juniper trees and attached the tarp using the tarp clips. I then staked out the the bottom on the four corners (after doubling over the floor of the shelter). After the basic lean to was complete, I draped the plastic sheeting over the front (held with the same tarp clips as above). I then cut extra pieces of the plastic sheeting to cover the ends. I used Gorilla tape on one end and tarp clips on the other so I could get in and out easily. Finally, I taped a mylar emergency blanket on the inside back wall in order to reflect the heat from my fire onto me. That was it for the shelter itself!

Rear View of Super Shelter (you can see the outline of the emergency blanket on the wall). 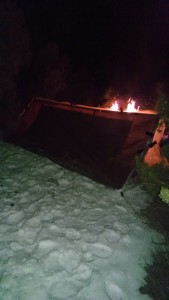 In order for the shelter to work as designed, I was going to need a fire to heat it. I decided to go with a long fire for several reasons. The first reason being that I thought it would offer the most warmth and the temperature was dropping fast. Second, there was cougar tracks and bear scat nearby, so I figured a bigger fire would be a bigger deterrent to curious critters. My last reason for going with the long fire was my most important factor in my decision… I forgot my hand saw and didn’t feel like chopping all my wood down into sizable pieces using a Cold Steel Trail Hawk! Being that the ground was wet and snow covered, I had to find dead trees that had not fallen completely to the ground. I removed the limbs with the tomahawk, used the small limbs as kindling, then put the logs right on the fire. My fire was between 8′ and 9′ long. While it was spectacular (and warm), it was a bit too much.

View from inside the Super Shelter 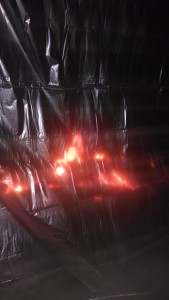 So, How’d it work? It worked too well! The temperature got down to single digits and there were times that the shelter was too warm to stay in! It actually melted the M&Ms in my gorp! I feared that my cameras would get damaged at one point and put them outside in my backpack. I would do several things differently in order to make this shelter more effective and comfortable. To begin with, I would use a different shelter configuration with my tarp. A 10′ long lean to is much longer than one person needs and takes too much firewood to keep warm. Next, with a smaller configuration I would also use a smaller fire. I would keep the fire the length of the face of the shelter, though as it keeps the whole shelter warm from head to toe. I will also use adhesive spray to attach the mylar emergency blanket to the tarp, because the tape was a pain in the ass. I also would rather have had a wool blanket for ground insulation than the casualty blanket. Other than that, a Super Shelter is definitely very functional, effective in cold weather, inexpensive, light and easy to carry. I would recommend putting the shelter gear (and a wool blanket) inside the tarp and roll it similar to a cowboy bedroll. it is smaller and lighter than most sleeping bags and covers shelter needs as well.

The individual items I used in this test all performed as I expected. While I would replace the the casualty blanket with a wool blanket, it isn’t because the casualty blanket didn’t do as it was supposed to, I just think a wool blanket would provide more protection from the frozen ground. The tarp clips are totally unnecessary, but they do make for quick and easy set up. The Chinese mylar blankets pretty much suck and are a single use item for sure. The Gorilla tape seemed to have a hard time sticking to the tarp. Not sure if this was due to the moisture, cold or heat of the fire so I’ll use it under some different conditions and give an opinion at at later time.

Other items that were used on this trip that are not a part of the shelter itself were: the Cold Steel Trail Hawk, the Schrade SCHF-1, the Smith & Wesson Border Guard, Stanley Cookset and of course for personal protection (against 2 and 4 legged predators) I carried my Glock 23. It was the Trail Hawk’s first outing and due to my forgetting my folding saw, it was used in procuring and processing most of my firewood. While a tomahawk is not the ideal tool for this job, I was pleasantly surprised at how well the Trail Hawk performed and I look forward to putting it through it’s paces in the future. The SCHF-1 was used to baton some kindling and cut some dead grass for tinder. I have been using this knife for a little over a year now and I like how it performs thus far and seems indestructible. My only complaints with this particular blade (I have the “spear point” version”) is that the blade would be less cumbersome if it were about an inch shorter, I hate the serrations (any serrations for that matter), I wish the butt cap was made of the same steel as the knife itself as I would feel more comfortable hammering with it and lastly, I wish it came with a kydex type sheath. The S&W Border Guard is a good sized folder, holds a great edge and I use it mostly for small game dressing, food prep and cutting cordage type chores. The Stanley Cookset is just a simple, down and dirty stainless steel cooker. I discarded the plastic cups and store other cooking related items inside. For less than $15, it suits my needs just fine. The Glock luckily was not needed, but I believe in the philosophy that it is better to have and not need, than to need and not have (particularly in the areas of money, firearms and ammunition).

I went on this trek alone, but I don’t recommend people doing that. I had scouted the location the week previous with a friend, so he knew my exact camp location and route. I also had three other people that knew what trail head I had entered and when I would be breaking camp and heading out. These things combined with the facts that I had cell coverage in that location, other survival options in my pack if needed, experience and survival training made me feel comfortable in testing this shelter alone. If you want some dirt time and/ or want to test methods and gear, do so with a buddy and a plan. 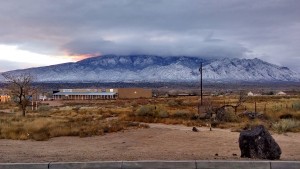 My Destination from afar…

One thought on “Super Shelter Review and Thoughts…”