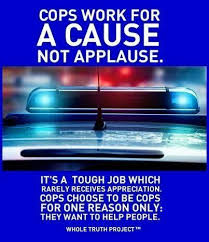 With all of the police shootings and attacks on police officers in the news lately, I felt that it was time that I cover how I was taught to survive encounters with the police. Yes, even as a white male this was a subject that my Father made sure that I understood completely. Not because he felt that the police were bad or because he thought I’d grow up to be an asshole, but because he had experience from BOTH sides of the badge and felt that it was something that everyone should know. While a lot of these things fall under the banners of common sense and common decency, it would appear as of late that many people could use this information.

What makes my Father’s insight useful in this area? First off, he can offer the perspective of a police officer due to 30+ years of experience he has in that field. Second, a good portion of his career was spent working undercover (Narcotics). While undercover, he looked like and ran around with criminals which from time to time would draw the attention of cops that had no idea who he was or what he was doing. Looking as he did, hanging out with who he was and all while carrying a gun are all ingredients for a terrible misunderstanding. He experienced people judging him negatively based solely on his appearance and the company he kept. Finally, he (and every Law Enforcement Officer you have ever come across) has been a private citizen and had encounters with the police. That last one is very important, so let me put it another way, “Every cop has walked in the shoes of a citizen, but not all citizens have walked in the shoes of a cop.” Understanding the perspective of a police officer is half the battle in having a positive (or at least neutral) experience when dealing with them.

1. Be Civil and Respectful. I didn’t say be overly friendly or kiss their ass… Be civil and respectful. If you’re not sure what that looks like, do this: Speak to them the way YOU would like to be spoken to by your boss. Don’t be condescending, abusive or profane. Also, do not ask them if they should be doing something more important! You have no idea what their last call was. They very well could have come from a domestic violence call where a wife that was just getting her ass kicked by her husband tried to stab the officer for having the gall to arrest her man, or come from a traffic accident where he (despite all his efforts) couldn’t save a child’s life, etc. Cops are human and things like that do have an affect on them. When you start playing “youtube lawyer” and start berating them right off the bat, holding your cellphone in their face; YOU are the asshole that is making the encounter go bad. If you are wondering if there is something more important they could be doing rather than stopping you for a vehicle code violation; let me answer you for them… Yes, they absolutely do. However, your stupid ass just ran a stop sign in front of him and his job is to address that as well. If he ignored it, someone would complain. If he stops you for it, you’re going to give him lip. He’d rather be going after the “real” bad guys, trust me. 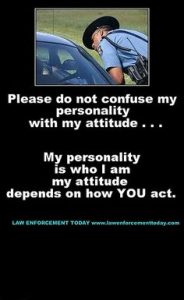 2. Keep Your Hands Visible. To my knowledge, no police officer has ever been killed by someone’s stare or someone’s mouth. Hands however, are different. All agencies train officers to watch a suspect’s hands. By keeping your hands where an officer can see them, you are dramatically lowering your chances of an encounter going bad. In addition to keeping your hands visible, keep them EMPTY! If you have a weapon on you (regardless of whether or not it’s legal or fake) keep it out of your fucking hands! If they want to remove it from you, let THEM do it, you DON’T TOUCH! For God’s sake please teach your kids not to point toy guns at folks as well. Especially at police officers. Pointing even a toy gun at someone that has probably, on many occasions seen minors commit crimes, and is armed is a recipe for disaster. A guy I worked with was killed while playing laser tag. He and his friends thought it would be cool to play at a school. Cops were called by a neighbor. They respond to a “man with a gun” call. While searching the school grounds this guy turns a corner, raises his laser tag gun… turns out it’s a deputy. Tragically, he was killed. That deputy has to live with the fact that he killed an innocent person, the person that called 911 feels some responsibility and his family and friends have lost someone they love. 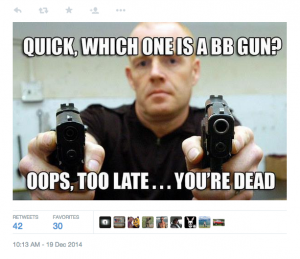 3. Don’t Argue. The place for arguing is in court, period. If an officer has made up his mind to write you a ticket or arrest you, that decision is final, accept it and start planning your defense. You WILL NOT win an argument on the street with the police, ever.

4. Don’t Resist Arrest. Just like the above, court is where you fight, not the street. You will NEVER win a fight with the police in the street. You may get the best of one, or maybe even a few, but they will keep bringing more cops and toys to take you into custody. If they are going to arrest you, comply and fight it in court. It’s bad enough that you may have to go to jail, but going to jail toting an ass whooping is even worse (and it could prevent you from being victorious in court, which is the fight that REALLY matters).

5. Avoid Doing Stupid Shit and Places Where Stupid Shit Happens. If you’re breaking the law or hanging out somewhere that the law is being broken, you’ve just increased the odds of having a bad encounter with the police.

I have been around cops my whole life. Most of my friends and relatives are involved in law enforcement in one way or another. If you follow this blog, you also know that I have been arrested before. My arrest was for a crime that I didn’t commit and resulted because the police officers involved were less than ethical. I never resisted and I fought my battle in court (and was vindicated). It sucked, it was expensive, humiliating and a huge pain in the ass. With that being said, those cops were not representative of all police. Believe it or not, most cops are regular folks just like you and I. They do a job that most would never want to do.

If you want to gain some insight into the perspective of a police officer, I recommend going on a ride along with your police department. I’ve been on many in different jurisdictions and one thing has always stuck with me. While “normal” folks are sleeping or otherwise going about their lives, they are completely oblivious to what these men and women are dealing with right in their own neighborhoods. Be warned, it may change your outlook and opinion of these folks forever! 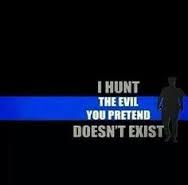