It’s been a while since I’ve posted anything, my sincere apologies! The Christmas and New Year’s season was pretty hectic (Storms with tornadoes and now flooding of the Mississippi River, plus the usual craziness of the holidays), but I promise there will be more regular and frequent posts this year. 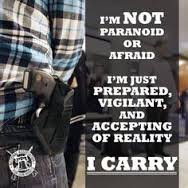 Why do I carry a gun? This is a question that I get asked when people discover that I carry. For a long time, it was a very uncomfortable question for me to answer. Not because I was ashamed or embarrassed, but more because most peoples’ responses to my answers made me lose respect for them. Maybe it had something to do with the fact that I was raised by a Father that ALWAYS carried, so to me it was “NORMAL” and to most other people I knew considered it very “ABNORMAL”. That may have caused me to feel a bit defensive about the subject. Then one day I was asked by one of the most important people in the world to me, my daughter. I knew that I not only needed to answer the question honestly, but I wanted to make sure that she understood why I did it and just as importantly, that she know what it WASN’T for as well.

It went like this… She was about 4 years old and we were going somewhere. When I was strapping her into her carseat, she looked up at me and innocently asked, “Daddy, how come you always have a gun?”
I wasn’t really prepared for the question when it came, so on our 45 minute drive to town, I explained it to her as best as I could.
“Well Baby, there are bad people in the world sometimes that will hurt folks and if one of them were to ever hurt you or your Momma and I couldn’t stop them it would hurt my heart forever and your Daddy just couldn’t stand that.”
She responded with, “We’re just going to town, there aren’t any bad people there, no one hurts us when we go to town.”
My answer, “Baby, nobody knows when bad people might show up somewhere. If people knew when bad folks were going to be around or if you could tell who they were just by looking at them, no one would ever get hurt. I don’t think anything bad is going to happen, but just like putting you in your carseat, I do it just in case to make sure you’re safe.”
Then she hit me with, “But you wouldn’t shoot a person would you, Daddy?”
“Your Daddy doesn’t WANT to shoot or hurt anybody, Baby; but if I have to to keep someone else from being hurt by a bad person, then yes, I would shoot someone”, I told her.

The rest of the trip was mostly me explaining to her the importance of her not talking about my gun while we were around other people and that hopefully I would never have to use it. She seemed to grasp what I was saying (because even at that age she was smarter than I) and appeared to be satisfied with my answers. 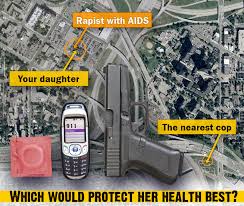 Now I’m sure a lot of you could probably articulate a much better response for a 4 year old, but that’s all I could come up with at the time. She did ambush me afterall!

Over the years I have become much more comfortable with who and what I am. Whether it is by Nature or Nurture, I refuse to be a victim or allow anyone to be victimized in my presence. I can not in good conscience, rely on someone else to put their safety at risk to protect me and mine. I will not outsource the safety/ security of myself or my loved ones to someone else. That is MY DUTY and RESPONSIBILITY. As part of my Personal Readiness System, I carry a gun. Maybe one day, bad guys will start making appointments to victimize people, when that day comes, maybe I’ll leave the gun at home… maybe.

Some of the common things I hear from people that don’t believe folks should carry guns and my responses are:
Q: What are you afraid of?
A: Not a whole lot, because I feel ready to handle whatever situation comes my way. Up to and including a deadly force scenario.

Q: Aren’t you afraid someone might take your gun away and use it on you?
A: Not particularly. First off, I don’t advertise that I’m carrying so no one will know it’s there unless I’m using it (They’ll know I have it when they hear the “BANG”). Secondly, I’ve trained retention techniques that I am confident in. Finally, I am of a mindset that I know that if I give up my gun, I’m (and those around me) are most certainly going to die. Therefore, they’re going to have to kill me to take it and to do that, they’re going to have to win one hell of a fight.

Q: Aren’t you afraid that by having a gun that a situation will escalate out of control?
A: In short, NO. Just because I have a gun doesn’t mean that I’m just “itching” to use it. I’ve had several altercations while carrying a firearm, that it never came into the equation. Normal people don’t kill one another over parking spaces, perceived slights or spilled drinks and the ones that will are more than happy to beat someone to death with a hammer. The gun isn’t what makes someone good or bad.

Q: What if your gun goes off by accident?
A: (This usually comes from someone that has never used a firearm.) In over 40 years of being around guns and having them in my home, I have never had one “spontaneously” fire. Never. I have seen people mishandle weapons and have a negligent discharge, but not one “just go off”. The closest thing to this mythical occurrence I have ever seen was one time when I was in the Marine Corps, a rifle that had fired hundreds of rounds very rapidly was left with a round chambered and it “cooked off” the round. Again, that was negligent operation (operator error, if you will) not the fault of the firearm itself.

Q: Why don’t you just carry pepper spray or a Tazer instead of a gun?
A: Those are non lethal deterrents, that are not always effective. Law Enforcement Officers use them to subdue unarmed suspects in order to take them into custody (not an activity I as a citizen am inclined nor likely to be attempting). My gun is for deadly force situations only, just like a LEO’s, the others are options to carry as well as a gun, but not in place of one.

Q: Do you carry a gun just so you can feel like a “tough guy”?
A: Uh-no. I learned that I was “tough” a long, long time ago and it has nothing to do with guns. Being tough is facing your fears and pushing yourself to deal with what makes you uncomfortable. Tough is much more mental than physical and has nothing to do with what tool you may use to defend yourself.

So do I think that everyone should carry a gun as part of their Personal Readiness System? Absolutely not! If you are unknowlegeable of proper firearm safety, don’t trust yourself not to kill someone over a parking space or immature enough to think that a gun is a magic talisman than makes you tough… PLEASE, don’t carry a gun! If you are a responsible adult that understands the responsibilities of carrying a firearm, know how to use it, when to use it and are capable of dealing with the consequences of taking a life, then by all means, get some training and protect you and your’s. It’s not for everyone. It’s a big responsibility, it can be very inconvenient and it’s occasionally a pain in the ass (literally. it can be physically uncomfortable); but it is an extremely effective tool for self protection.

It’s really that simple, folks. My gun is just a tool in my Personal Readiness System. Like any other tool, it has it’s specific uses and can be dangerous if used for anything other than it’s intended purpose (a gun should never be used to “scare someone away” or as a “bluff” of any kind). It does not change the way I feel about myself or others, nor how I react to difficult situations that people encounter everyday. It is there for emergency use in a life or death situation, that’s it. I look at it the same as a fire extinguisher, seat belt, car seat, spare tire, first aid kit, etc. I have it in case I need it, but hope that I never do. I always keep in mind the motto of: It’s better to have and not need, than to need and not have!

Again, I carry a gun because I could not live with myself if I had to stand by and watch my loved ones or one of my fellow citizens be murdered or raped because I wasn’t ready/ prepared to defend them. That is not something I’m willing to carry around with me. 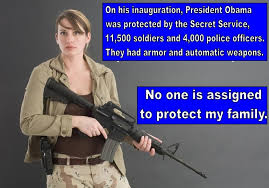 If you have any questions regarding this topic, please feel free to ask in the comments and I will answer as soon as possible.